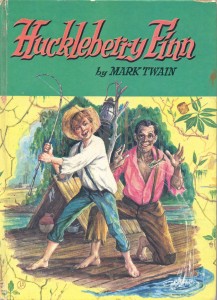 For Christmas in 1960, my Aunt Ella Mae and Uncle Joe Whitworth gave me a copy of Huckleberry Finn.  To my recollection that was my first exposure to Mark Twain, the last of the three writers I would say influenced my writing ambitions as a youth.

Since I didn’t have a large personal library then, I read that copy of Huckleberry Finn multiple times before I went off to college.  Additionally, I visited the school and public libraries to check out other of Twain’s works, including Tom Sawyer, A Connecticut Yankee in King Arthur’s Court, Life on the Mississippi and Roughing It.

My aunt and uncle were not literary people and of all the books they could have given me that Christmas I have always wondered why my aunt gave me what is considered by many to be the greatest American novel ever written.  Maybe it was because the title character spent a lot of time on the Mississippi River.  My parents, the Whitworths and my brother and I as kids spent a lot of leisure time fishing on the Llano and later Pecos rivers.  Whatever the reason for selecting that book, it gave me a juvenile appreciation of Mark Twain as a storyteller.

After high school and college I gained a more sophisticated appreciation of Twain as an American humorist and novelist from a few biographies and critical essays I read.  What I enjoyed most about Twain was his timeless insight into the foibles and fallibilities of humanity.  His observations about the human condition in the 19th Century still ring true in the 21st Century.

My favorite Mark Twain quote is:  “Get your facts first, and then you can distort ’em as much as you please.”  That observation seems to accurately represent the state of American politics and national journalism today.

I purchased a magnet with that quotation at the Mark Twain House and Museum in Hartford, Connecticut, a couple years ago when we visited New England.  I keep the magnet on our refrigerator as a reminder of the house tour where I stood in the actual room where Twain wrote Huckleberry Finn.

What I enjoy about Twain is that his works can be read on multiple levels.  Further, his words and his observations remain timeless, such as “Against the assault of laughter nothing can stand.”  Or how about his observation on health and fitness, “The only way to keep your health is to eat what you don’t want, drink what you don’t like, and do what you’d druther not.”

Mark Twain, you’ve gotta love him, his literature and, most of all, his perpetual insight.