As a young boy I remember seeing a lot of John Wayne movies in the 1960s, but one I don’t recall is The Man Who Shot Liberty Valance.  I do remember the identically named Gene Pitney song, though it was not actually used in the picture.  If I did see the movie, it probably didn’t strike me at the time as it was filmed in black and white and didn’t have the grand Technicolor landscapes that were such an integral part of the westerns I recall. 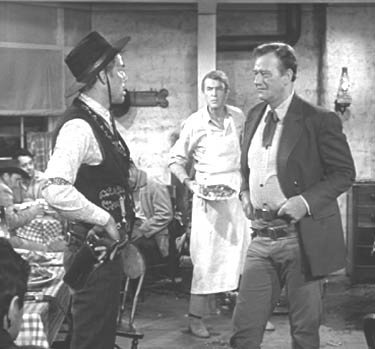 But now that I’ve had the opportunity to watch it multiple times on TCM, I consider it one of the best western movies ever made because of its stark black-and-white portrayal of good versus evil and, at the same time, its nuanced view of myth and reality in the Old West as articulated by newspaper editor Maxwell Scott’s line, “This is the West, sir.  When the legend becomes fact, print the legend.”

With screen giants John Wayne as rancher Tom Doniphon, Jimmy Stewart as newly arrived eastern lawyer Ransom Stoddard and Lee Marvin as the delicious villain Liberty Valance, the film was loaded with star power, but the character actors were equally delightful.  They included Andy Devine as the atypical portly and nervous town marshal, Strother Martin as Valance’s delightfully obsequious sidekick, and Edmond O’Brien as Dutton Peabody, the pompous and tipsy editor of the Shinbone Star.

One of my favorite move exchanges ever, again because of its juxtaposition of myth and reality, is journalist Peabody’s protest against his nomination to a political post.

Peabody (O’Brien):   Good people of Shinbone, I, I’m your conscience; I’m the small voice that thunders in the night; I’m your watchdog, who howls against the wolves.  I, I’m your father confessor!  I, I’m … what else am I?

In many ways, The Man Who Shot Liberty Valance is an elegy to the passing of the Old West, the conflict between the past as represented by both Doniphon and Valance and the future as represented by Stoddard, whose gunfight with Valance wins him the girl, Vera Miles in this case, and ultimately earns him a seat in the U.S. Senate.  One of John Wayne’s most powerful acting scenes, ranking right up there with some of his scenes in The Searchers, comes when he explains what really happened the night Liberty Valance died.  All was not as it seemed that night, and reputations were made and lost as a result.

The film was added to the National Film Registry by the Library of Congress in 2007 because of its cultural significance.  It’s worth seeing again.