Of all the Old West towns I’ve read about over the years, Fort Griffin, remains my favorite, but not until this year had I ever had the opportunity to attend the Fort Griffin Fandangle, produced by the citizens of nearby Albany, Texas. 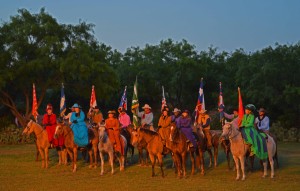 We attended the opening performance of the 77th edition of the Fandangle on Thursday night and found it to be the most entertaining outdoor production we had ever attended.  It was an amusing mix of music, drama, humor and history, tracing the growth and demise of the frontier community.  Fort Griffin the town took its name from the military post of the same name established in 1867 on a plateau overlooking the Clear Fork of the Brazos in what is today northern Shackelford County.

The town grew as a festering scab at the foot of “Government Hill,” as the military post was called by the locals.  The town took on a variety of sobriquets, ranging from “The Flat” to “Sodom of the Prairie.”  Fort Griffin was where Doc Holliday and Wyatt Earp first met and where the legendary lady gambler Lottie Deno plied her skills before disappearing from history.  The town was the setting for my first historical novel, The Lady and Doc Holliday.  What I liked about the historic town of Fort Griffin was its convergence of Comanche, military, ranching, trail driving and outlaw history.

What I liked about the Fandangle was the homage to the region’s history, told with humor, clever lyrics and the spectacle of galloping horses, rumbling wagons and stage coaches, and more than 300 Albany citizens in colorful costumes celebrating their heritage.

Until Thursday night, I’d never had a herd of longhorns charge right at me or seen a rattlesnake drink whiskey, even if it was a mechanical serpent.  The rattlesnake, which appears during a drunken cowboy’s reverie, is the most requested feature of the show, which varies from year to year. 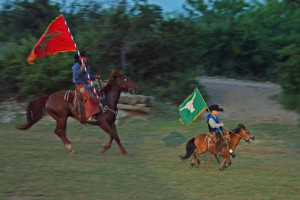 This year the theme focused on frontier children and one of the joys of the performance was watching the kids from toddlers to teens singing, dancing, fighting their costumes or just looking cute at the feet of their parents.  Some of the children in the play were fifth generation performers in the Fandangle, first presented in 1938.

After the military post was abandoned in 1881 and the Texas Central Railroad bypassed The Flat for Albany in December of the same year, Fort Griffin the town slowly atrophied away.  Today the abandoned Masonic Lodge is the only original building still standing in the once thriving town.  Up on Government Hill, the ruins of the fort remain under the care of the Texas Historical Commission, which has just opened a visitor center.

Albany, Fort Griffin and the Fandangle are all worth a visit if you ever get a chance as we certainly had an entertaining afternoon and evening immersed in the region’s history.