Like most of my boyhood peers, I collected trading cards, most of which were baseball cards.  But I did collect a few others, such as what I called “Outlaw Cards” back in the 1960s.  Though all of my baseball cards have disappeared, except for one, I ran across my Outlaw Cards the other day while going through some of my childhood collectibles. 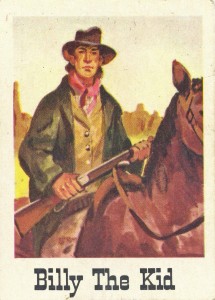 There is a certain irony that several of the cards feature Old West historical figures that have been major or peripheral characters in novels I have written, starting with Billy the Kid in The Demise of Billy the Kid, which is scheduled for republication this summer.

The Outlaw Cards were actually a card set named “Good Guys and Bad Guys.”  Produced in 1966 by Leaf Trading Cards, the set included 72 cards, starting with Robert Ford, who shot Jesse James, as No. 1 (an odd choice for No. 1 in my mind) and Billy the Kid as No. 73, the last in the series.  The company somehow skipped the No. 40 Card.

Of the 72 cards, I managed to buy and save 54 of the total at five cents a pack.  Of the 54 I managed to keep, four were characters in Demise, including Pat Garrett, Tom O’Folliard and William Brady.

Each card has a rather garish portrait of the western celebrity on the front, along with his or her vital statistics and a brief bio on the back.  No telling how many times I read the bios on the back, never realizing then that I would one day write novels using many of these same figures. 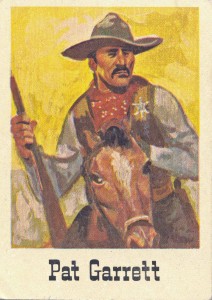 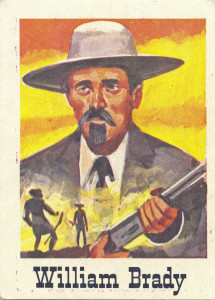 Perhaps I uncovered why I have always had trouble spelling the name of Wild Bill Hickok.  I’ve always wanted to add another “c” before the last “k.”  Well, Wild Bill’s last name is misspelled “Hickock” on his card, No. 34 in the series.

And perhaps, my interest in the Old West is partially a result of those cards and their mini-bios of well-known figures from the time. 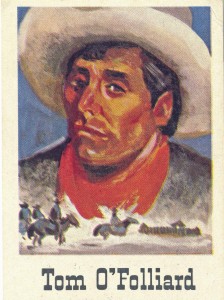