Nearly everyone has heard of the American folk legend Billy the Kid, but I daresay few today have heard of Walter Noble Burns.

The fact is, however, that without Walter Noble Burns few Americans would likely know about Billy the Kid today.

By the turn of the 20th century, the story of Billy the Kid had pretty much waned as a topic of interest in popular culture.  Few serious academic historians cared about Billy’s story, which had been relegated to the realm of tawdry dime novels rather than serious history.  While a few regional historians, primarily Maurice Garland Fulton of the New Mexico Military Academy, had begun to research the Lincoln County War in the 1920s, the topic was generally beneath the dignity of serious academic historians. 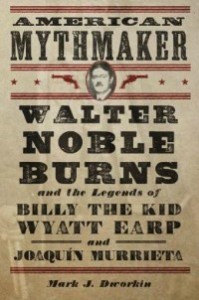 Then came Walter Noble Burns, a Chicago newspaperman who picked up the Kid’s trail in 1923 while visiting New Mexico and interviewing various people who remembered Billy the Kid and his exploits some four decades after they had occurred.  Like many good newspapermen, Burns never let the facts get in the way of a good story and in 1926 published The Saga of Billy the Kid.

A rip-roaring tale of Billy the Kid, Saga was part journalism, part history and part imagination, all in the name of an entertaining story.  Burns’ book became a bestseller and reintroduced Billy into the popular culture, where he has remained almost 90 years after the book’s first publication.  Saga spawned movies, TV shows, folk songs, a ballet, poems, an opera and even some serious historical research on Billy the Kid.

As recently as this fall, you can say The Saga of Billy the Kid created a historical frenzy over whether a tintype of a buck-tooth cowboy playing croquet in a striped sweater was or was not Billy the Kid along with some of his regulators, who thundered through the Lincoln County War.

The story of Walter Noble Burns and his impact on popular culture is recounted in the book American Mythmaker:  Walter Noble Burns and the Legends of Billy the Kid, Wyatt Earp and Joaquin Murrieta by Mark J. Dworkin from the University of Oklahoma Press.  This is a fascinating book, especially if you are interested in how legends re-enter the culture and then feed on themselves until they consume the truth upon which they were first based.