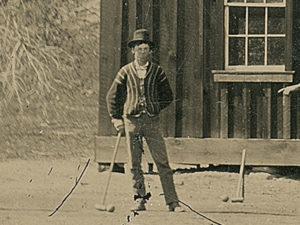 Some 135 years after his demise, Billy the Kid has made me a published poet, proving once again the long reach of the buck-toothed New Mexico outlaw.  My trail to writing poetry began in October 2015 with a National Geographic documentary narrated by Kevin Costner and claiming to have found a new tintype of Billy playing croquet.

After viewing the documentary, I concluded it was Billy.  Then in February of 2016, True West came out with a cover story “This Image Could Be Billy.  Really?” 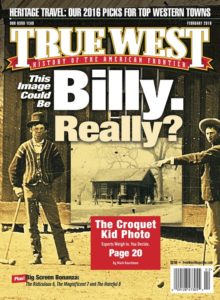 After reading True West’s case against the validity of the documentary’s conclusions, I decided the weight of evidence, including a lack of a clear provenance, was 99.99 percent against the sweater-clad croquet player actually being the Kid.  Nice try but there have been several  Billy the Kid imposters over the years, including most famously Brushy Bill Roberts of Hico, Texas.

Then it hit me that perhaps both sides could be right, inspiring me to write “Billy the Kidder,” which appeared in the December issue of the Journal of the Wild West History Association.

Billy was a Kidder, as everybody knows.
He rode through Lincoln County, giving one-man shows.
Audiences all loved him, every prank and joke.
Stand-up was easier than being a cowpoke.

Billy was a Kidder, you’ve got to understand.
He honed his art and  craft to tickle every fan.
Performing at the Wortley and Mesilla Courtroom, too,
Billy was wanted for the humor he would do.

Billy was a Kidder, he often left them dead
’Cause you could die of laughter from what Billy said.
Morton and Baker plus Bell and Olinger, too,
Met their Maker giggling at what Billy could do.

Billy was a Kidder, who worked hard for his gigs
Even doing weddings and occasional shindigs.
Once his jokes had ended, he then took to dancing
Rather than working on tintype provenancing.

Billy was a Kidder, who earned his sobriquet,
Even finding time to play a little croquet.
With mallet, hoops, pegs and a colored wooden ball
He out-shot his opponents, every one and all.

Billy was a Kidder, a photog did agree
And asked to make a tintype for posterity.
Billy said yes with but a single caveat
To a croquet photo destined for a pawn shop.

Billy was a Kidder, Nat Geo didn’t b’lieve
So Kevin Costner voiced their documentary.
Once on television, it must always be right.
Those who think otherwise are certainly not bright.

Since Billy was a Kidder, the image can’t be true
’Cause Billy had a plan for fooling me and you.
When croquet matching or visiting Blazer’s Mill,
Billy used a stand-in by the name of Brushy Bill!

After completing the poem, I began to look for a photo to accompany the piece.  To my surprise, I miraculously stumbled across one locally at Ye Olde PhotoShoppe.  Though I don’t have the provenance on it, it seems to me to be Billy and I am looking for a buyer.