We just returned from a trip to Ruidoso and the obligatory visit to Lincoln, N.M., where Billy the Kid rode into legend.  I’ve been there many times over the years to walk what President Rutherford B. Hayes once called “the most dangerous street in America.”  I’ve climbed the stairs where Billy the Kid made his last escape from the Lincoln County Courthouse while awaiting his hanging.  This site, more than any other, spawned my interest in Old West history. 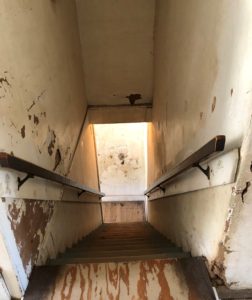 Though I have learned something new about the Lincoln County War with each visit, no trip was more impressionable than my first stopover when my parents took me there in the late 1950s.  Today Lincoln is a New Mexico Historic Site managed by the New Mexico Department of Cultural Affairs, but back then the Lincoln County Courthouse was overseen by a private organization.  The museum was old-style, just glass cases with labeled artifacts and little if any interpretation.

One glass case displayed a sidearm from every Lincoln County sheriff up to that time and included the most memorable and haunting artifact I had ever seen.  Over the barrel of one revolver was a crude cardboard arrow with hand lettering that said something like “note the three notches.”  The arrow pointed to the barrel of the gun where three slight scratches represented the men who had been killed with this weapon.  I found it unfathomable that the lives of three men could be relegated to such modest marks on a gun barrel.  I had always assumed that notches were big gashes on the butt of a revolver so these subtle scratches seemed all the more sinister.

Fast forward two decades later when Harriet and I moved to Lubbock and took our first vacation to Ruidoso after returning to Texas from the Midwest.  We, of course, visited Lincoln.  At the courthouse I asked one of the volunteers what had happened to the guns of all the sheriffs and was told that someone had broken into the courthouse several years before and had stolen them all.  Although the FBI was called in to investigate, the guns were never recovered.

It infuriated me then and still does to this day that some selfish individual stole those guns and deprived future generations of children the opportunity to see and experience them as I had as a child.  On this visit I retold this story to one of the site Rangers, whose grandfather had been a sheriff of Lincoln County, but she was unfamiliar with the story or if the guns had yet been recovered.  She did say that more recently in 2015 a Thompson submachine-gun that had been used by the sheriff’s office in the 1930s and was on display in the historic courthouse was also stolen.