One of the most enjoyable things about being a member of Western Writers of America is the creative people you get to meet, like Lee Goldberg this year. He invited me a couple years ago to become a member of the International Association of Media Tie-In Writers for my previous novels based on the Bonanza television series. Since then we’d shared Facebook posts and some e-mails, but had never met in person. 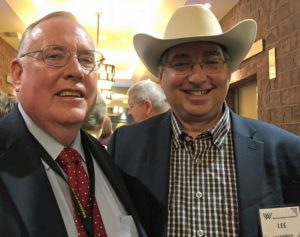 Lee is a talented writer, screenwriter, publisher and producer known for his work on several different TV crime series, including Diagnosis: Murder and Monk, among others. He is a two-time Edgar Award nominee by the Mystery Writers of America and two-time Shamus Award nominee by the Private Eye Writers of America. He and another fine novelist, Max Allan Collins, established the International Association of Media Tie-in Writers. Additionally, Lee is co-founder and publisher of Brash Books, whose author Leo W. Banks earned two Spur Awards in Billings for his debut novel Double Wide.

Lee’s latest book True Fiction is a great read, both a hilarious and scary page-turner. It’s hilarious because Lee develops great characters in amusing circumstances, and scary because the book gives insight into the reach of the nation’s security agencies into our lives. I can’t wait to get his next novel, Killer Thriller, due out in February, largely because his protagonist is an author!