In the life of a writer certain moments are particularly rewarding, such as seeing the cover art for the first time, getting your author’s copies or receiving a royalty check.  For me the most gratifying event of them all is completing the first draft.  Without it none of the other moments will follow and, most importantly, that occasion means I have triumphed over the tyranny of the blank screen/page and now have something to edit, which is where the real fun comes in.

I began in January writing the fifth book—a trail drive novel—in The Memoirs of H.H. Lomax and finished the first draft in early March—Hallelujah!  Then I had spent six weeks doing heavy editing, finishing up four days ago with the second draft.  I will do a third draft, giving the manuscript its final polish before I send it in ahead of a June 1st deadline. 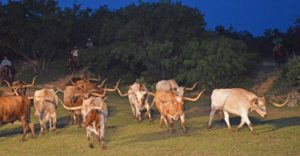 Longhorns on the Move

Over the years, I’ve learned that no two writers have exactly the same approach to moving from blank page to finished manuscript.  I go through three drafts, the first being the most challenging because I am starting with nothing but doubts that I can transfer 300 to 500 pages of story from my brain through my fingers to the  keyboard and computer screen.  I just slog away at it, not worrying about style, story or the finer points of writing.  Once I have the first draft, then I have something to work with, and it is much more fun to “write.”

At the opposite end of the writing spectrum was the late Frank Roderus, a Spur Award-winning author who wrote with me a Bantam series in the 1990s based on the Bonanza television series.  Frank swore—and I had no reason to doubt him—that he did a single draft of his novels and never went to a second draft.  And, Frank made his living entirely from his writing!  I was never that good nor confident.

For me, the real writing comes in the second draft with the editing, though I didn’t understand that early in my college career.  While at Baylor, I asked legendary Texas journalism professor David McHam if I really had to take the required editing courses as I just wanted to be a writer.  I’ll never forget his response:  “Preston, I think you will find that good writing is good editing.”  Truer words were never spoken, and so I have come to value and enjoy the editing more than the writing, so to speak.

In First Herd to Abilene, my protagonist H.H. Lomax tramples on some of the myths and history of the Chisholm Trail to get a herd of longhorns to the first of the great Kansas cattle towns.  The comic western also provides the background and resolution of Lomax’s differences with Wild Bill Hickok as alluded to in the preceding volume, Bluster’s Last Stand, which won the 2018 Will Rogers Gold Medallion Award for written western humor.  First Herd, like Bluster’s, was fun to research, write and edit.

The first draft came to 547 pages, but by the time I edited it down it was a mere 484 pages.  While that is an inefficient way to write, it is what works best for me.  I’ll go through a third draft and make the final edits and polishes before I send the manuscript to my publisher so H.H. Lomax can ride again, this time up the Chisholm Trail, though he makes the case it should really be called the “Lomax Trail.”