One of pleasures of doing genealogy in addition to learning about your forebears is that you come across such interesting family stories.  One of those family legends provided the genesis for a short story I wrote for The Spoilt Quilt and Other Frontier Stories:  Pioneering Women of the West, a Five-Star anthology scheduled for release November 30th. 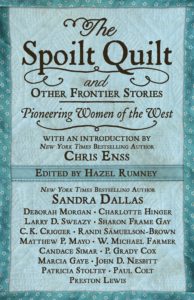 “The Hope Chest” is based on my great grandmother Camp’s escape from an overbearing father in Alabama to come to Texas and marry her childhood sweetheart.  Let’s just say Grandma Camp was clever—and  sneaky.  Had she not run away to marry my great grandfather, I would not be writing this or even be alive for that matter, so I owe her a great debt.  She fled to Jones County, Texas, to marry her betrothed and settled on land some of which is still owned by my parents.  We have in our living room the wheel chair she used in her later years as well as a kerosene lamp that graced the Camp home.

Some of the details of her story came down through three generations of oral family history, but what makes the story even more fascinating was that as she was in Heflin, Alabama, trying catch the train to Texas unobserved, a newspaper reporter spotted her and wound up doing a story in the Cleburne New Era edition of September 20, 1894, in a Page 4 column headlined “Love Laughs at Locksmiths.”

The unnamed reported described my great grandmother thusly:  “Standing close beside the wagon was a very pretty girl, presumably about 17 years of age, and she seemed quite nervous, as if she expected some one she didn’t care to see (her ‘pa,’ thought the news-gatherer).”  With a little snooping, the newsman learned, “The young lady had long since plighted her troth to a young man who is now in far-away Texas.  But her father was bitterly opposed to their ‘jinin’ hands,’ and placed restrictions upon his daughter, but ‘love laughs at locksmiths’ even, and Wednesday night she ‘stole a march’ on pa and came to Heflin.”

After the train pulled away from the depot for Texas, the reporter ended his story with these words:  “The New Era wishes this unknown ‘heroine’ a happy journey over the troubled sea of life, and may her husband gather together many buffaloes and wild Mustang ponies on the desolate plains of the ‘Wild and Woolly West.’ Fare thee well!” 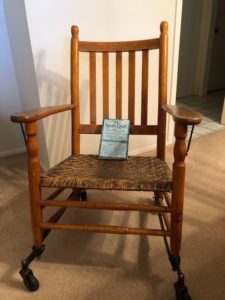 article which I was able to identify and date through newspapers.com.  I also have the telegram her betrothed, Morgan Camp, received in Texas alerting him of his sweetheart’s departure for the Lone Star State.

It is a pleasure to share a fictionalized account of her adventure and to be included in The Spoilt Quilt with so many fine writers who contributed other wonderful stories of women on the frontier.