I’m excited to announce that Rio Ruidoso, the first book in my Three Rivers Trilogy on the Lincoln County War, was released this week as a Five Star Western from Gale, a Cengage Company.  In many ways, this book was six decades in the making from the time I first visited Lincoln, New Mexico, as a seven-year-old with my parents and little brother.

In Lincoln when I was a wide-eyed kid I walked for the first time in the steps of Billy the Kid, starting a lifelong fascination with life in the Old West.  Lincoln was just a side trip from our vacation destination of Ruidoso, a virtual paradise from our West Texas home, with mountains and pine trees and streams, things you could only read about in Midland.

Having spent most of my life in West Texas, I’ve made dozens of trips back to the mountains of Ruidoso and on every visit I always take a journey back to Lincoln.  The other day I was going through some old family photos and found one of myself and my brother with our dad in a Ruidoso stream on our first trip in 1957.  I hope to one day find a photo of me in Lincoln on that same trip. 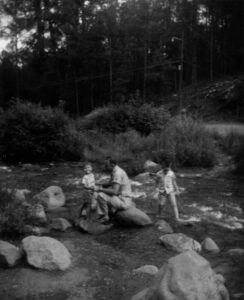 Shortly after I returned from that trip, Mom took me to the Midland City-County Library and I checked out The Tragic Days of Billy the Kid by Frazier Hunt and devoured the book, the first I ever read on Billy and the Lincoln County War.  I’ve probably consumed more books on the Lincoln County War than on any other subject in my life, so it was only natural that I would eventually write about it, first with The Demise of Billy the Kid, and now with Rio Ruidoso.  It’s not like I’m the first to see the dramatic potential of the Kid or the Lincoln County War, so I looked at some of the lesser known events before, during and after the feud and tried to develop my plot around those events in my latest book.

Rio Ruidoso focuses on some of the racial bigotry surrounding the Texas expatriate Horrell Brothers and the political corruption of Lawrence G. Murphy, the region’s economic kingpin, that preceded the Lincoln County War.

My book received a great review from Booklist in its Jan. 1, 2020 edition as follows:  “Lewis begins the Three Rivers Trilogy in the weeks leading up to the Lincoln County War (1878–1881), a conflict in the New Mexico Territory made famous because of Billy the Kid’s participation in its most notorious skirmishes. Taciturn Wes Bracken arrives in Lincoln County after leaving bad memories of the Civil War behind in Arkansas. Before he even has the opportunity to meet up with his brother, Luther, he ends up a marked man when he saves a Mexican-American family from a local posse. Things only get worse from there: Luther’s alcoholism is more severe than Wes ever suspected, Luther’s claim to the homestead is tenuous, and a band of horse thieves has been plaguing the area. Plus, it’s unclear which one of Lincoln County’s two wealthy businessmen has the people’s best interests at heart, and which one is plotting against them all. Lewis deftly weaves actual stakeholders from the War into the action (including Jesse Evans, John Chisum, and Lawrence Murphy) and successfully uses a sweet and progressive love story to move the engaging plot forward. — Sarah Steers”

The trilogy was named for the three rivers—Rio Ruidoso, Rio Bonito and Rio Hondo—that come together to feed the Pecos River.  The second book in the trilogy, Rio Bonito, is now with the editors for a 2021 publication date, and I’m doing the final research (more reading on the feud and the Kid, yeah!) for Rio Hondo, which is due in December.  None of that would ever have been possible without that first trip to Lincoln years ago and without the support of my editors today.  So, a special thanks go to Senior Editor Tiffany Schofield and Editor Hazel Rumney for their faith in me and for their editing skills which greatly enhanced the final product.

If you’re interested in a new look at the events preceding the Lincoln County War, check out Rio Ruidoso on Amazon.