I am pleased to announce the publication of Cat Tales of the Old West:  Poems, Puns and Perspectives on Frontier Felines.” the debut book of Bariso Press.  This is a different type of project for me as it is a nonfiction work that looks at how cats were covered in 19th century newspapers west of the Mississippi River.  The newspaper excerpts range from charming to alarming as cats were viewed as a nuisance as much as a furry companion back then. 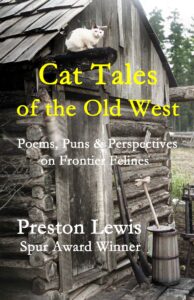 How, you ask, did an aging, semi-rational novelist choose such an esoteric topic?  Was he catatonic or cataplexic or simply confused (euphemism for senile)?  Actually, my journey from being a midlist novelist to the world’s greatest living expert on cats in the Old West began five years ago on a bus ride from Cheyenne, Wyoming, to Fort Laramie as part of a Western Writers of America field trip that followed segments of the Oregon trail.  We made the airconditioned journey with our Texas companions Beverly Waak and Mike Cox.

Jefferson Glass, our historical docent for the bus ride, mentioned that cats on the Oregon Trail were more valued than horses.  At that point Mike, who was editor of the Journal of the Wild West History Association at the time, turned to me and said he was assigning me to write an article on cats in the Old West.  When I got back to San Angelo, I checked the indices of dozens of my historical books on the Old West and found fewer than ten references to cats, slim pickings for a major article on the feline frontier.

I was at a loss to complete the assignment until I checked out newspapers.com and did a keyword search for “cats.”  I turned up 7,149,178 hits for cats.  By comparison, I found 4,484,133 hits for dogs, showing felines were much more on the minds of 19th century Americans than canines.  So, I collected hundreds of those articles and wrote a 7,500-word story for Mike, using a fraction of the research I had accumulated.

Thinking there might be a market for more of my findings, I decided to look at self-publishing additional cat stories.  Thus, Harriet and I formed Bariso Press with her as Publisher and Editorial Director and me as Writer, Designer and Flunkie.  This week, we published Cat Tales of the Old West in both trade paperback and eBook format on Amazon, just in time for Christmas.

Neither of us are cat fanatics, but we both love history so we took this on as our first project to see how the process worked creating a book through Kindle Direct Publishing.  So far, so good.  If we find the results are satisfactory, we plan to publish the Civil War correspondence of Harriet’s great-great grandparents and the family memoirs I collected from Dad and his siblings back in the 1970s.

As for cats, attitudes today are a far cry from a common view of cats on the frontier.  Perhaps the frontier outlook was best summed up by the Dallas Daily Herald that reported on Virginia City, Nevada’s Great Fire of 1875 that did $12 million dollars in damage, destroyed 2,000 structures and devastated a section of town three-quarters of a mile long and half-a-mile wide.  Reported the Herald in a front-page story, “There’s a silver lining to the Virginia City cloud, in the fact that from fifteen to twenty thousand prowling pussy cats are estimated to have gone up in the flames of the recent conflagration.”

So, Cat Tales of the Old West gives some of the good, the bad and the ugly of frontier cats.  If it does well, there’s a second Bariso Press volume of cat hiss-tory on the horizon.  (Sorry, it’s hard to avoid bad puns when you write about cats, but I’m just following in the footsteps of my 19th century writing predecessors.)  Check out Cat Tales of the Old West at Amazon: