Mix-Up at the O.K. Corral 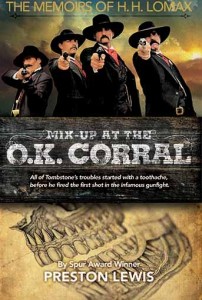 “Keith Bell” rated it 4 of 5 stars on Goodreads.com
February 22, 2015
Read the first 2 books in the series back in the 90’s and found this one at a local used book store and glad I did. Fun read for anyone that is familiar with Western Lore. Weaves a great fictional narrative that stays true to some of the facts and just plain old embellishes others. Gotta love a rascal like H.H. Lomax.

“Stony Monday” rated it 5 out of 5 stars on Amazon.com
April 6, 2014
This is one of the funniest books you will ever read about Wyatt Earp and Tombstone.  The author wrote three books.  Billy the Kid and Jesse James are the other two.  He wrote them like he says he saw it and states he actually knew all three men.  Very good read.

“Orville” rated it 5 out of 5 stars on Amazon.com
“This book is one of a kind!”  March 4, 2005
H.H. Lomax is very, very funny.  This book is a must read as well as its sequel “The Redemption of Jesse James.”  You don’t have to like westerns to like this book.  Lomax doesn’t have a lot of friends.  At one point the whole town is betting on where he will get shot. Quote:

“A Customer” rated it 5 out of 5 stars on Amazon.com
“Preston Lewis is a very funny man,”January 16, 2000
I don’t normally read westerns, but a friend insisted I read this one.  After laughing my way through it–and thoroughly enjoying Lomax, the wacky main character–I managed to hunt down the other two books in the series.  I would be hard-pressed to say which one is the best; all of them feature well-drawn, engaging characters, and the author retells western legends in a sly and unpredictable way.

“A Customer” rated it 5 out of 5 stars on Amazon.com
“A fun and exciting book,” November 6, 1998
I really enjoyed this book. It let my imagination run wild. In fact, I thought it to better than Lonesome Dove.

“A Customer” rated it 5 out of 5 stars on Amazon.com
“One of the funniest westerns I’ve read,” February 28, 1998
Truth and fiction in the days of Tombstone A.T.