The Redemption of Jesse James 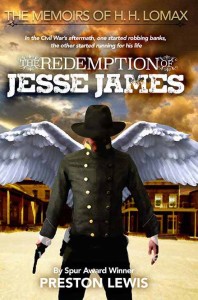 Davis rated it 2 of 5 stars on Goodreads.com
March 25, 2009
Fun little story of a boy growing up in Arkansas during the Civil War.  Thanks Jay for the read!

Katie rated it 4 of 5 stars on Goodreads.com
Recommends for: western fans, history fans, April 8, 2008
I really liked this book. I loved the point of view it was writen from. It starts out from the point of view of a boy at the beginning of the Civil War and his growth from child to adult. As I said it is told from a boy’s view of the civil war era the wording and context are from the era and age. If you are a politically correct fanatic this is not the book for you. Preston did a great job of putting the reader in the shoes of a teenage boy with the attitudes and mores of the civil war era. It is a great story based on history

“Sgt. Greg Parker” rated it 5 out of 5 stars on Amazon.com
“Superior Civil War Novel,” April 28, 2007
This is the best novel about the Civil War I’ve ever read.  While the various descriptions made this book sound somewhat clownish, it really is the story of two families of non-combatants and how they struggled to stay alive as the War raged around them.  Funny, sad, touching, and excellent in all respects.

“Orville” rated it 5 out of 5 stars on Amazon.com
“This is the best western you will ever read!” March 4, 2005
This is actually the first book in the H.H. Lomax Series.  I think this is the funniest western that I have ever read except maybe Mixup at the OK Corral (By the same Author).  I cannot understand why this book is out of print.  If you find a copy, buy it and don’t lend it to anyone because you will want to read it many times and this is not a book that anyone will give back.

“Vic Cox” rated it 5 out of 5 stars on Amazon.com
“Like A John Wayne Movie,” August 13, 2000
This is the funniest western I’ve ever read!  My favorite along with Lonesome Dove. I love his country sayings.  I laughed out loud and was sorry that the book ended.  Didn’t know this book existed until I stumbled onto it in a library.  A Lewis book is like a John Wayne movie, based on history, spurred with suspense and spiced with humor.  The perfect formula for any book.  I’d love to have the Lomax set!  Why are they out of print???

“A Customer” rated it 5 out of 5 stars on Amazon.com
“A witty interpretation of western lore,” August 17, 1999
This is a humorous, clever tale of a well known western folk hero and a virtually unknown bumbling western nobody.  The book engrosses you from the beginning and keeps you guessing until the very end.  Don’t let the length discourage you.  This is a great read!

“A Customer” rated it 5 out of 5 stars on Amazon.co
“Good yawn,” March 17, 1997
This is the second in the book series and is well worth the time it will take to read this. It has action and adventure and there is even a joke in it about Bill Clinton.

Roundup Magazine
October 1995
Lewis tells of his hero’s boyhood in Arkansas during the Civil War, and his acquaintance with Jesse James.  Using humor rather than religious metaphor—Hawthorne never met a metaphor he didn’t like—Lewis draws a portrait of a place and a time that is as real and as haunting as Hawthorne’s Puritan America … Using humor to contrast and compare, to advance the plot, and to define characters, Lewis underscores the horror of the Civil War and the conflict of loyalties it engenders.

Texas Books in Review
“A Carefully Crafted Work,” Winter 1995
The young Lomax is a blend of Huckleberry Finn, Penrod, and Holden Caulfield—and other youthful protagonists in American fiction … The Redemption of Jesse James is a carefully crafted work.  Lewis has researched conditions in the Arkansas home front during the Civil War … The novel is filled with gritty realism in language and in the depiction of violence.  With seasoned competence, Lewis also interweaves elements of genuine pathos.  Parents lose children to the horrors of war …human potential is wasted … Lewis’s skill as a storyteller makes Lomax come to life.

Books of the Southwest
Meet H.H. Lomax, who will meander on his mule Flash through some of the West’s most fabled events … Written with verve, intelligence, humor and sound research.

Wall Street Journal
“Gang of Offbeat Western Novels Takes Genre by Storm,” July 18, 1994
A new series by Preston Lewis features a protagonist, H.H. Lomax, who isn’t much of a gunfighter, horseman or gambler.  Instead, he is a likable loser who runs into old western celebrities like Billy the Kid and the Jesse James gang, and barely escapes.

Rocky Mountain News
“Lewis & Lomax,” November 27, 1994
It takes a special talent to write first-person novels based on the premise of ‘lost papers,’ but Preston Lewis is an especially fresh and innovative writer and he knows how to do it.