The Lady and Doc Holliday 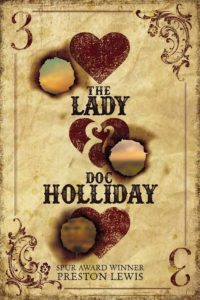 Southwestern American Literature
Fall 1990
Lewis’ narrative technique is admirable.  He chronicles a relatively brief period of history with sure skill.  He knows how to pace a story … He has drawn well the historical time of the novel – sexuality, gambling halls, disease, bleeding wounds, swinging corpses, and all.

Concho River Review
Fall 1990
One of the most remarkable aspects of the novel is the incredible amount of detail that Lewis displays concerning gambling with cards.  He certainly proves his understanding of the subject matter, from the basics of the game, all the way down to the various ways to cheat.

Books of the Southwest
May 1990
The hide-hunters’ Fort Griffin, Texas, at its gritty zenith.  Holiday finds his match in cards and love in the mysterious Lottie Deno (who is buried over in Deming, New Mexico).  Lewis knows his background and card lore.

Texas Books in Review
Spring 1990
For Western fans this novel is a keeper … One of the major strengths of this work is the re-creation of old Fort Griffin.  Lewis’s imagery sets us down in the Bee Hive where “tobacco odors and the stench of men who worked more than they bathed” mingle.  The hard life of women and children in an early Texas village and the warmth of a community Christmas dinner where citizens gather to feats and visit at the Bee Hive reflect the truth of frontier life.

Wichita Falls Times Record News
January 13 & 14, 1990
With this all-too-realistic novel of love, gambling and survival in the West Texas of 120 years ago, Lewis deals readers all aces.

Dallas Morning News
January 14, 1990
The Lady and Doc Holliday breathes new life into a Texas mystery:  what happened to Lottie Deno, the beautiful West Texas gambler who broke men’s hearts – and wallets – from San Antonio to Fort Griffin in the 1870s.

Abilene Reporter-News
January 7, 1990
Whether the legends are truth or fiction, Lewis has come up with a fascinating story about some real characters from the region’s past.

Library Journal
November 15, 1989
The author paints a vivid picture of the untamed West and the wild, funny, seedy characters who made its legends.  Descriptions of rigged card games and chases by vigilantes will have the reader rapidly turning pages.